The period early April to the end of July was rather varied weather-wise, with temperatures slightly above average in April and May but with below average rainfall. The first three weeks of June were colder and wetter than usual, before a warmer weather pattern took hold culminating in several hot spells and peaking on 25th July when temperatures exceeded 32°C/90°F.

With exception, it seems to have been a largely productive breeding season.

Spring is arguably the best time for birds at Fleet Pond. The season rarely disappoints in terms of variety, as late winter migrants rub shoulders with newly arrived summer visitors. Then the air is full of song and the birds are looking their best in breeding plumage.

The late winter migrants included the remnants of March’s Brambling flock.  These were sighted in the Brookly Stream corner up until 17th April, when ten were still present, including several males in their smart breeding plumage; whilst the last Redwing of the season was noted heading over northeast on 23rd April.

Expected spring migrants appeared in greater numbers as April progressed. It was a particularly good spring for Sand Martins, with peak passage on 8th April when 321 were noted heading over north in 60 minutes of counting.  Singing Chiffchaffs and Blackcaps were widespread around the reserve by 10th April when the sole spring record of Willow Warbler was recorded.  The first Reed Warbler was heard on 17th April, Garden Warbler and Whitethroat on 29th April and the first Swift seen on 30th April.

Scarcer spring passage migrants included single Little Gulls on 6th, 8th and 9th April, 20 Arctic Terns (ten briefly on 19th April and a further ten on 8th May – all leaving northeast) and seven Black Terns (one on 25th April, three on 8th May, one on 9th May, and two on 17th May).  The first Common Tern of the spring was seen on 19th April and they were regular visitors thereafter, with a high count of 12 passing through on 17th May 2019.  Migrant waders again disappointed with a Redshank on 9th April, Common Sandpiper (two on 23rd, one 30th April and two 15th May), single Oystercatchers on 29th April, 24th and 25th May and 2nd June, a circling Dunlin on 8th May and a scattering of Snipe (last on 3rd May) and Little Ringed Plovers.

A female Garganey, one of the highlights of the spring, was present between 7th-10th May, favouring the pool adjacent to Grasmere reedbed. This is the second spring in a row that this scarce visitor has been recorded at the reserve, and hopefully it is the start of a new trend. It definitely headlined the migrant wildfowl. 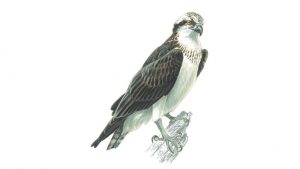 A handful of Shoveler was recorded in April including a pair that were in residence for most of the month.  Unexpected were a Shelduck on 23rd April and a Barnacle Goose on 29th April, the latter no doubt of feral origin.  Other spring migrants included two Woodlark in the MoD fields to east of the reserve on 29th April, an Osprey (illustrated above) that drifted through north on southerly winds on the evening of 7th May, a Little Grebe on 11th May, a Peregrine Falcon over on 25th May and a report of a possible Iberian Chiffchaff briefly singing at the eastern edge of the reserve adjoining the MoD fields on 29th April.

Excitingly three protected ‘Schedue 1’ species took up territory or attempted to breed at Fleet Pond this year for the first time.  While two were unsuccessful, their presence is hopefully a sign of things to come in future years.  First-up, a pair of Mediterranean Gulls

(illustrated above) settled into the Black-headed Gull colony on Clearwater Island in mid-April and were individually seen dropping into the same spot each day until the second week of May. It is suspected that this pair had built a nest and were likely incubating eggs but for whatever reason the eggs never hatched – perhaps due to inclement weather on 8th May, the inexperience of this pair (one of which seemed to be young – a 3rd calendar year bird) or perhaps through predation.  By coincidence, this year’s colony of Black-headed Gull had a poor year too, with an estimated 160 pairs nesting (40% down on 2018) and only producing an estimated 50+ young.  Secondly, a male Cetti’s Warbler took up territory in the reedbeds and scrub between the Chestnut Grove jetty and the Brookly Stream. First heard at this location on 23rd April, it remained faithful to this area until at least 9th June.  Only occasionally seen, it is not thought to have attracted a mate.  Single Cetti’s Warblers have been present at the Reserve over the last few winters, but this is the first time one has taken territory in the breeding season.

Finally, one or two Firecrest (illustrated above)  took up territory in the Brookly Wood for the first time.  Attracted by the Bookly Wood’s habitat – mature woodland with plenty of ivy and under-storey holly – it is likely that breeding took place. At least one individual was still present on 12th July. 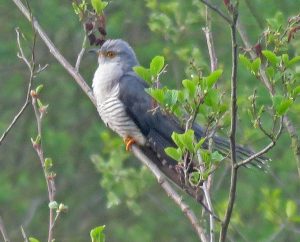 Other notably breeding news included the presence of a pair Cuckoos (a single bird pictured above at the Pond) up until the second week of June, with the male loudly announcing his arrival on 1st May.  This is the first time for several decades that Cuckoos have been present throughout the breeding season at Fleet Pond.  Usually we have been lucky to have just have one or two sighting each spring over the last decade.

Up to ten pairs of Tufted Duck bred successfully and are on course to raise a record 20 young and two pairs of Gadwall (with at least four young successfully raised). Six pairs of Great Crested Grebes are in-residence but none appear to have bred, and Water Rails were heard from three different locations around the Pond which is encouraging. 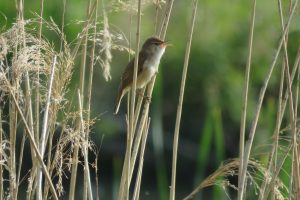 Minimum estimates of summer warbler territories this year include at least 15 Reed Warblers (pictured above at the Pond) ten Blackcaps, seven Chiffchaffs, four Garden Warblers and three Whitethroats, the latter territories on the reserve with several other pairs of Whitethroat on the adjoining MoD fields (pictured below). 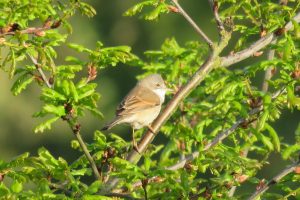 Unusually, Sand Martin was the most numerous hirundine throughout the summer, with a peak of 60 on 8th June but up to 20-40 were present most days suggesting that breeding maybe taking place close-by.  In contrast (Barn) Swallow, House Martin and Swift numbers were lower.  The Jackdaw roost, that took hold in the late winter has been sustained into the summer months with 90 still roosting at the reserve on the evening of 3rd June while post-breeding Starlings have also started to roost again this year with a count of 700 noted on 3rd June.  Early autumn migrants are now starting to appear with two Shoveler present on 21st July and the first returning Common Sandpipers (two) on 28th July.  Next up – autumn migration proper! 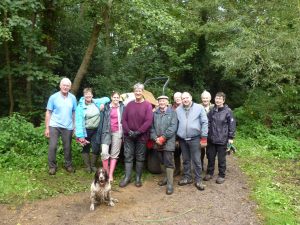 This short film, Brightening the  Brookly Stream, shows our volunteers at work with Fleet Pond Ranger Sam, clearing encroaching vegetation from the banks of the Brookly Stream and woods to enable more light to reach the stream bed, promoting greater diversity of aquatic and woodland plants.

For much of its course, the Brookly Stream is artificially straight, culverted and heavily shaded. We have an opportunity in the section we help to manage to take steps to encourage the establishment of a range of aquatic plants and to diversify stream flow and depth. Such habitat will benefit a wide range of flora and fauna.

The work we undertook was agreed with Hart Countryside Services and is listed in its Autumn/Winter 2019 maintenance program. Strimming was restricted to one bank for much of the section between the confluence with Fleet Pond and Avondale Road. 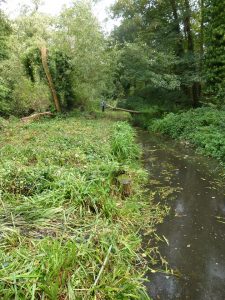 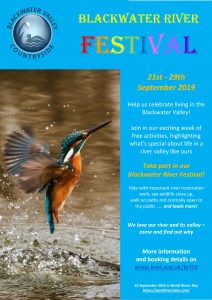 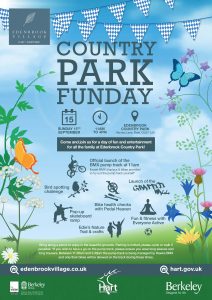 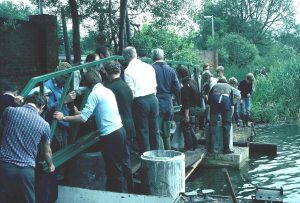