In these extraordinary COVID-19 times our wildlife and birds provide much needed solace, and a welcome distraction from the current predicament we find ourselves in. For those fortunate enough to live within walking distance of Fleet Pond never has its value meant more. As spring progresses and the weather improves, the Reserve’s full vibrancy of life and colour will, hopefully, provide a ray of optimism for the tough months ahead.

This winter will go down as one of the mildest in recent memory, with temperatures 2°C above average in both January and February. Whilst there were plenty of wet and windy Atlantic depressions to contend with (storms Ciara and Dennis) there were comparatively few frosts. March ended dry with a persistent cold north and northeast wind. As for the birds, January and February were characterised by the usual winter lull before March welcomed a pick-up of migrants and our first summer visitors, right on time.

Winter wildfowl numbers were again disappointing, with Teal being at an all-time low; a winter high count of only six in January while Gadwall topped out at four. Likewise, Shoveler were present throughout, with maximum counts of four on February 10th and 21st, but encouragingly a pair was still present at the end of March. Diving ducks were represented by Tufted Duck with numbers slowly building to a flock of 12 by mid-March and two male Pochard put in an appearance on February 7th. Great Crested Grebes were also in lower numbers this winter, with maximum counts of eight in January, six in February and ten by the end of March, the latter count no doubt supplemented by migrants. In contrast, Snipe were present in good numbers with a peak count of 77 on January 8th when a single Jack Snipe, (illustrated below) now a scarce winter visitor, was located at Fugelmere Marsh and up to four Water Rail were present into March. 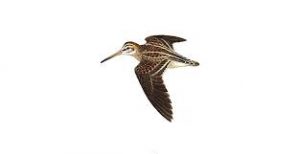 Winter roost counts included peaks of 250 Jackdaws on January 21st and February 5th, reducing to 80 by the end of March and a high count of 235 Magpies on January 21st.  Reassuringly, wintering Siskin numbers rebounded from the low levels recorded in November and December with a flock of 175 observed in Alder trees at the Brookly Stream corner on January 8th, reducing to just 25 by March 4th. Slightly unseasonal was a male Blackcap (illustrated below) observed in the northeast corner of the Reserve on February 23rd. Probably a visitor from nearby gardens. 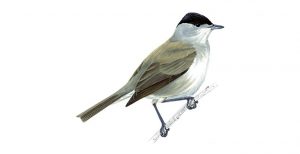 Blackcap are becoming increasingly common in winter in Southern England, favouring suburban gardens. This trend is believed to be a response to climate change as more Blackcaps winter further north of their historic wintering range.

By mid-March, spring migration was underway announced by a newly arrived Chiffchaff in full song on March 14th, always the first harbinger of Spring to us birders. This was followed by others in the subsequent days. The first Sand Martins (three) appeared on March 17th, increasing to eight on March 18th, but few were reported thereafter as the winds turned more northeasterly. In March, observed flyover of winter migrants heading mostly east or northeast over the Reserve, included total counts of 130 Stock Doves, 180 Starlings, 46 Fieldfares, 27 Redwing and 115 Chaffinches as well as a Raven (March 9th) and a Peregrine Falcon (March 26th). 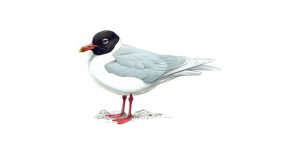 Overshadowed by the gull action, the last few days of March also saw a migrant male Brambling singing in the Brookly Stream corner on March 31th (the first record of 2020), as well as a singing Firecrest (Brookly Wood) and a Cetti’s Warbler (Station Corner), the latter present since March 9th. The reappearance of singing Firecrest and Cetti’s Warbler (both protected Schedule One Species) suggests that last summer’s breeding territories will not be one-off events – fingers crossed! 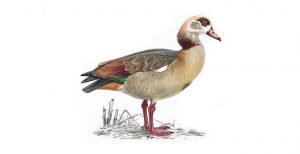 Finally, news on our early breeders reveals there are five or six active Grey Heron nests (down from seven in 2019), while a pair of Egyptian Geese (illustrated above) was seen with an early brood of three small young on March 30th. The latter do not have a good record of surviving at Fleet Pond, but we shall see. Good birding and stay well!