The first detailed reference to Fleet Pond was made in 1324 when “the great fishery (of) Fleet Ponds” is referred to in the Rolls of Account of Crondall Manor.

At this time, there were two ponds providing a thriving fishery of considerable importance. The fishery was probably initially supervised and managed by locally based monks or under tenancy by the two farms recorded at Fleet.

The Origins of the Pond

Fleet is an old English word that refers to an inlet or brook, possibly to a place where a stream enters or leaves a larger body of water or marshland. It’s likely damming an existing watercourse to build up a head of water formed the two ponds.

Many bishopric ponds were created in the second half of the 12th Century and Fleet Pond could have been in existence by 1200. These ponds were stocked with fish by the monks and managed by them to provide an essential source of food.

Why a Pond and not a Lake?

The current definition of a pond is ‘an area of water smaller than a lake, often artificially made’.

In mediaeval times, a pond always referred to an artificially created body of water and a lake to a natural one. Although Fleet Pond may be larger than some lakes, it is believed to be originally manmade. 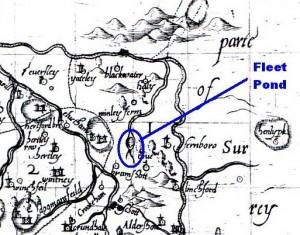 Fleet Pond and the Bishopric of Winchester

In 1491, a new arrangement was instigated when the Prior at Winchester began to lease Fleet Ponds and pastures to a tenant at Fleet Farm for an annual rent that included the supply of “a hundred of the fishes, pike, tenches, perches, bream and roaches, to be carried and delivered (to Winchester) in a good and fresh state”.

The leasing arrangement for Fleet Farm, pasture, fishery and ponds continued for some 350 years. A renewal of the lease, dated 1833, covers Fleet Ponds, the fishery thereof, the pasture, several other parcels of land, houses, farm buildings, mills, mill ponds, streams and watercourses. It is recorded, however, that by this date there remained only one pond.

The following photos date back from the early 1900s. If you click on an image a larger version and gallery will appear:

The Location of the Second Pond

There are two theories regarding the location of the second pond. One places it to the north of the surviving pond on what is now Ancells Farm, while the other proposes that it was to the south in Pondtail. Evidence suggests the Ancells Farm location is the more likely of the two.

What Happened to the Second Pond?

A document dated 1567 records, “the head of which said pond is now by a great storm and fall of water, utterly broken and carried away”.

Repairs to the dam would require “great expenses of money, waste of timber and other charges, to make a new head to maintain the said pond as it has been theretofore”. Instead, a licence was issued “to ditch and fence in, enclose and convert the said pond into meadow, pasture or otherwise.”

No mention is made of any damage to the other pond or to the bridge.

The following photos date back from the early 1900s. If you click on an image a larger version and gallery will appear:

Fleet Pond and the Railway

On 7th April 1836, the London and Southampton Railway Company purchased “the Fleet Mill Pond and certain allotments of wasteland belonging to Fleet Farm” for £50 from the Dean and Chapter of Winchester.

The engineers building the railway line from London to Southampton did not let an ancient pond stand in their way. They constructed an embankment across it, which still stands today, dividing the main pond from the smaller pond by the Heron on the Lake pub.

The potential for day-trippers from London was not lost on the railway company and they built a station called Fleet Pond Halt. The Pond became a popular beauty spot, with visitors enjoying picnics and swimming in the summer and ice-skating in the winter.

If you click on an image a larger version and gallery will appear:

Fleet Pond and the Army

In 1854, large areas of land around Aldershot were acquired for military training and Fleet Pond became part of this estate.

As part of their training, the Royal Engineers built Fir Tree Island, a long T-shaped jetty on the eastern side, and a large bridge that crossed the pond.

In 1905, the Royal Aircraft Establishment (RAE) was founded in Farnborough and in 1912 Geoffrey de Havilland conducted floatplane trials on Fleet Pond.

Early in the Second World War, the Pond was drained and the land planted with willows, as it was feared this large body of water would provide a navigation feature for the Luftwaffe who planned to bomb Farnborough Airfield. In 1947, the Pond was refilled and reeds were planted.

If you click on an image a larger version and gallery will appear:

A Site of Special Scientific Interest

The railway had enabled many Victorian naturalists to visit Fleet Pond and references to its flora frequently appeared in natural history journals from this era, with herbarium sheets located at the Natural History Museum in Kensington and also at Reading and Oxford.

The importance of the Pond to wildlife was recognised in 1951 when it was designated one of the first Sites of Special Scientific Interest in Hampshire. The SSSI was reaffirmed in 1984 under the provisions of the Wildlife and Countryside Act.

However, by 1984, the small pond by the Heron on the Lake lost its SSSI status due to development around it. The Flash (a flood relief area by Fleet railway station) had been infilled in 1976 for construction of an industrial estate and the Waterfront Business Park now stands in its place.

In 1972, the Council purchased the Pond and adjacent heathland and woodland from the Ministry of Defence after the Army declared the area redundant as training land.

The Fleet Pond Society was founded four years later in April 1976. At the Society’s suggestion, Fleet Pond was declared a Local Nature Reserve in 1977. The first task for the Society’s volunteer workforce was to build the footpath that now encircles the pond. This included the installation of the Brookly and Carnival Bridges.

In 1983, volunteers from the Society began selective management of the habitats of the Nature Reserve and this work has continued to the present day in conjunction with Hart District Council’s Countryside Service.

A booklet, A History of Fleet Pond, is available free of charge from Fleet Library or can be downloaded History Booklet.