It has been a rather dull and wet few months. Temperatures were at or above normal particularly in November, before turning colder in the last week of December and on into early January. Rainfall was generally above average, especially in October, with plenty of strong winds crowned by Storm Bella in late December.

Birding-wise it was a rather uneventful few months. October yielded few autumn migrants of note, other than the continued presence of the male Garganey, first seen on August 6th and last seen on October 21st, a late date for this summer migrant.

Good numbers of Shoveler remained into mid-October, with 40 logged on October 9th. Most moved on thereafter, with only a handful reported in November and a December high count of six on 23rd. 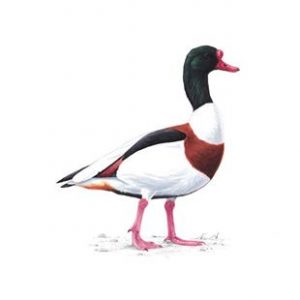 Great Crested Grebe numbers disappointed all autumn, with up to three present to mid-January. This suggests that August’s fish die-off has rendered Fleet Pond less attractive for this avid fish eater for now. We should be expecting counts of between 10-20 at this time of year, so we will be monitoring this species carefully this year and hoping for a return to form.

A Little Grebe, a scarce but expected autumn visitor, was present between October 31st-November 2nd.

Better news included a count of 12 Water Rails in the reedbed circling the Pond at the end of October/early November. Equally pleasing was the good numbers of Common Snipe wintering this year with 55 logged on December 13th and 37 on January 2nd. 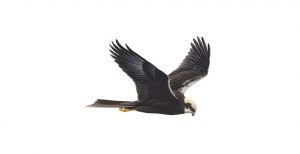 Highlight of the period was a female Marsh Harrier (illustrated above) observed hunting at the reserve mid-morning on December 8th, becoming the second record for this rare raptor at Fleet Pond in 2020.

On October 20th, a male Cetti’s Warbler announced its presence from the station car park reedbeds with its distinct and loud song; it was still being heard at the end of November. Spring 2020 saw the first establishment of a breeding territory of Cetti’s Warbler at the reserve, so optimism prevails for a repeat performance in 2021. 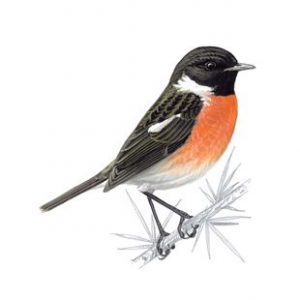 Similarly, Firecrest (illustrated above) is now becoming a regular in these reports, with two observed in woodland at the end of Wellington Avenue in early December and another (or the same) coming from the Brookly Wood on January 1st.

Reports of Stonechat included pairs at the MoD fields on November 9th and in Wood Lane Heath on December 8th.

Winter finches were present in average numbers with up to 300 Siskins and smaller flocks of Lesser Redpolls, favouring the Brookly Stream alders, at the end of December and into January, and other reports were received from Sandy Bay.  More notable were a flock of four Crossbills (illustrated below) and a further single overflying the reserve on December 9th and 10th, respectively. 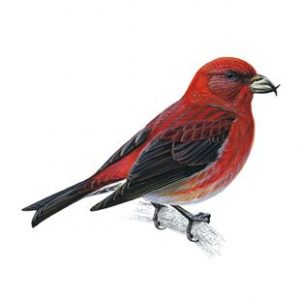 Encouragingly there were several reports of Kingfisher and Green Woodpecker at the reserve too. Green Woodpecker used to be a regular sight here until 2018, when it is suspected the very cold ‘Beast of the East’ spring weather that year extirpated the local population, so it is good to hear they are recovering and returning!

Finally, autumn and winter roosts included peaks of 250 Redwing on November 22nd, 420 Jackdaw on October 26th and 320 on December 30th, 115 Magpie on December 30th and one or two Little Egrets inconsistently through to the end of the year.

Looking forward for us avid birders, the good news is that we only have a few more weeks until the spring migration gets underway in early March. By that time I hope COVID-19 will be well in retreat and a return to more normal times in sight.  Good birding!

Due to the lockdown we cannot distribute hard copies of our newsletter, so please click below for the Winter issue.

We have objected to and made comments on the planning application that has been submitted by Hart District Council to widen the path that runs alongside Fleet Pond and the railway station car park.

Comments have to be made by 11 January. You might like to do that on the Planning Portal against reference 20/03004/FUL. Full details can be found here: https://publicaccess.hart.gov.uk/online-applications/applicationDetails.do?activeTab=summary&keyVal=QKUWPEHZFXY00.

These are the main aspects we commented on:

1)      The timing of the proposed works is unacceptable.

2)      The ecological mitigation proposed for the path works is not sufficient and is unacceptable.

3)      The edging design for the path is unacceptable for Fleet Pond SSSI and badly thought out.

4)      The general design of the footpath is poor and could be made more acceptable for visitors.

We were quite surprised when we discovered earlier this week that the application had been submitted in early December 2020. This has made it difficult for us to communicate with you in a meaningful way. There is a substantial amount of documentation in the application. Up to this point we have had some good, constructive liaison with HDC’s Countryside Service and have achieved a number of significant changes to their original plans.

We are very grateful to the Virgin Money Foundation for awarding us a grant of £485. With this money we have bought a pressure washer. Watch the video below to see it in action and hear Terry’s reasons for buying it.
A huge thank you to Fleet Pond supporter Sarah Green of Virgin Money for bringing this grant opportunity to our attention.
https://youtu.be/CA69lkh_c9A

After the spectacular early summer weather we experienced, the months of July through to September were a little more mixed.

There were still plenty of hot spells, but these were interspersed by the odd week of unsettled weather, including Storm Francis in late August. Temperatures were generally at or above normal, while rainfall gradually recovered to more typical levels as the period progressed.

As in recent summers, Fleet Pond was again negatively impacted by a blue-green algae bloom. It was more serious this year, and a contributing factor in the mass mortality of fish on August 11th.  As for the birds, they largely managed to survive the event although there was a noticeable exodus of Great Crested Grebes at around this time.

July was rather uneventful with only a few notable sightings to report. Up to six Common Terns were present for much of the month, including one juvenile (raised elsewhere), while the only migrant wader of note was a single Redshank on July 25th. A flock of 150 Sand Martins present on July 7th was a good count, up from the more usual 40 and no doubt included an influx of migrants, while Swift passage included 152 logged heading west on July 25th.

Activity picked-up markedly in early August with migrant and returning wildfowl. Four Shoveler sighted on August 3rd were the prelude to another good early autumn for the species. Numbers built to 11 by the end of August, 28 by September 9th and peaking at an impressive count of 61 on September 21th before falling back.

Teal were also more in evidence with high counts of 15 on August 9th and September 16th. More exciting was the appearance of a first year male Garganey (male in breeding plumage, illustrated below) on August 6th that remained in residence into October but throughout its stay it was remarkably elusive, and was often ‘missing’ for weeks at a time, such is the maze of islands it could lose itself in. Other notable wildfowl sightings in August included an unexpected flock of four male Pochard on August 22th, with six present on 24th and up to four Mandarin Ducks throughout. 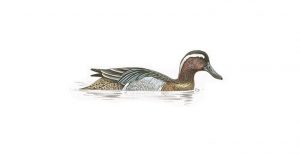 Cattle egrets—new visitors to the pond

The late afternoon of August 11th produced one of the surprises of the year; three Cattle Egrets (single, in summer plumage illustrated below)perched on dead alder branches on Cormorant Island in the middle of the Pond. With this sighting a new species was added to Fleet Pond’s bird list. 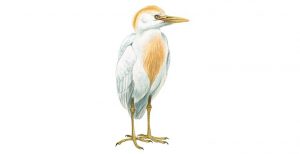 The trio ended up roosting overnight on one of the willow islands, along with ten Little Egrets, but sadly they were not seen the following morning.  Cattle Egret is another species that is gradually expanding its range northwards from the Mediterranean into the UK. Hampshire’s first successful breeding took place at a coastal site in 2019 and the species is now well established west of us in the Somerset Levels. However, Cattle Egret is a scarce bird away from a few favoured southern locations, and this sighting represents the first record for north east Hampshire and takes Fleet Pond’s bird tally to an impressive 228 species! Despite regular observation of the reserve’s small roost of Little Egrets thereafter, no further sightings were made.

The remainder of August’s sightings were pedestrian by comparison, with migrant waders represented by Green Sandpiper from August 6th into mid-September, Common Sandpiper on August 10th, a Dunlin at Sandy Bay and a Greenshank both on August 14th and the first Snipe of the autumn on August 16th. The only gulls of note were an adult Yellow-legged Gull who dropped in briefly on August 4th, a small movement of Herring Gulls over southwest that same day and a juvenile Common Gull present on August 8th.

Mid-August saw a pick-up in passerine migrants, including Tree Pipits (2 on 12th and singles on 13th, 17th and 18th), up to five Sedge Warblers, two Spotted Flycatchers and a high count of 27 Whitethroats, both of the latter primarily around the MoD fields and eastern boundary of the Reserve on August 17th. 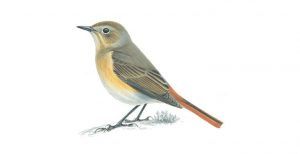 The MoD fields continued to be productive in early September with a Redstart (female illustrated above), up to two Whinchats and eight Stonechats on September 1st-2nd increasing to 12 on September 15th.  Summer migrants quickly disappeared as the month progressed with the last Swift seen on September 1st, Willow Warbler and Spotted Flycatcher on 7th, Reed Warbler on 10th and Hobby on 18th.

Wildfowl continued to be a highlight into September and besides the aforementioned influx of Shoveler, sightings included several flocks of migrant Tufted Ducks, the largest comprising 23 on September 21st, five Wigeon on September 16th, with further pairs of Wigeon on 17th and 19th and up to seven Mandarin Ducks (illustrated below) present throughout. 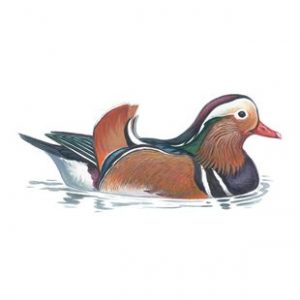 Roosting geese included counts of 632 Canada Geese and 194 Greylag Geese noisily leaving the reserve at sunrise on September 16th, the latter’s tally only pipped by a count of 205 on August 21st.

September’s highlight, and probably the most unanticipated bird of 2020, was the discovery of an adult Whooper Swan cruising the Pond on the evening of September 26th. Staying overnight, the swan departed early on the morning of 27th. Throughout its short stay it was chased a few times by our resident Mute Swans, but managed to find some undisturbed areas to successfully rest and feed. Whooper Swan is a very scarce winter migrant to southern England and this sighting coincided with a handful of others that were recorded at sites scattered around England on this particularly early autumn date. It is likely this individual overshot its intended destination and probably originated from eastern Scandinavia or points further east.  This is the first record of Whooper Swan at Fleet Pond since two adults touched down briefly on October 22, 1994. (Whooper Swan pictured below, by John Clark) 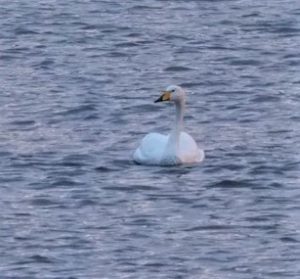 As autumn progresses and the days shorten, attention turns to the arriving winter visitors and the several thousands of birds that will start to use Fleet Pond as their preferred evening winter roost site. Already we are seeing up to 300 Jackdaws roosting at the reserve as well as lesser number of Starlings and Magpies.

As usual, the weather will influence the birding over the coming months and what treasures there are out there to find.  Good birding!