To see details on the launch of our latest Clearwater 2 Campaign in February 2015, see the Latest Conservation Report.

The Clearwater Campaign was launched in 2010 by FPS Patron Chris Packham. In the video below, Chris explained the problems faced by the Reserve due to the high volume of silt accumulation in the Pond.

He detailed what would be needed to help solve these problems. Using the slogan ‘Imagine Fleet without a Pond’ the Campaign heightened awareness amongst the local community as well as businesses and the members of local authority.  As well as creating awareness, the Campaign also sought financial help towards restoration.

Owner of Fleet Pond, Hart District Council, was already aware of the serious threat that silt posed. Talks were arranged with the Defence Training Estates (DTE) in an attempt to reduce silt input from the military training lands at Long Valley. Increased heavy vehicle training exacerbated by major tree clearance and ground lowering to allow commercial aviation to be operated at Farnborough Airfield, had led to dramatic increases in silt input to the Pond.

In 2006 DTE agreed to the installation of new silt traps and filters. Natural England monitored the results and accepted that a reduction of input had been achieved and agreed work could commence on drawing up a restoration programme to include major dredging works.

Fleet Pond Restoration Steering Group was formed in 2007. It involved Hart District Council, Fleet Pond Society, Natural England and the Environment Agency. Tenders were issued and Johns Associates Ltd were subsequently appointed as consultants to draw up a Restoration Programme. A period of meetings to agree objectives and consultations with interested parties followed. Thames Water and the Reservoirs Authority, for example, needed to be consulted as Fleet Pond is classed as a reservoir in terms of water storage but not for the public water supply.

Funding was applied for from several sources:  Higher Level Stewardship funds were obtained for habitat restoration and enhancement, EU Water Framework Directive became the main source for water quality improvement, funding much of the dredging work and Section 106 funds provided matching and backup funds for several elements of the restoration work.  In all £1.2 million was made available for the first three phases.

Michelle Salter provided this image of the equipment being craned into position on the Pond in Feb 2012. The first phase of dredging commenced. 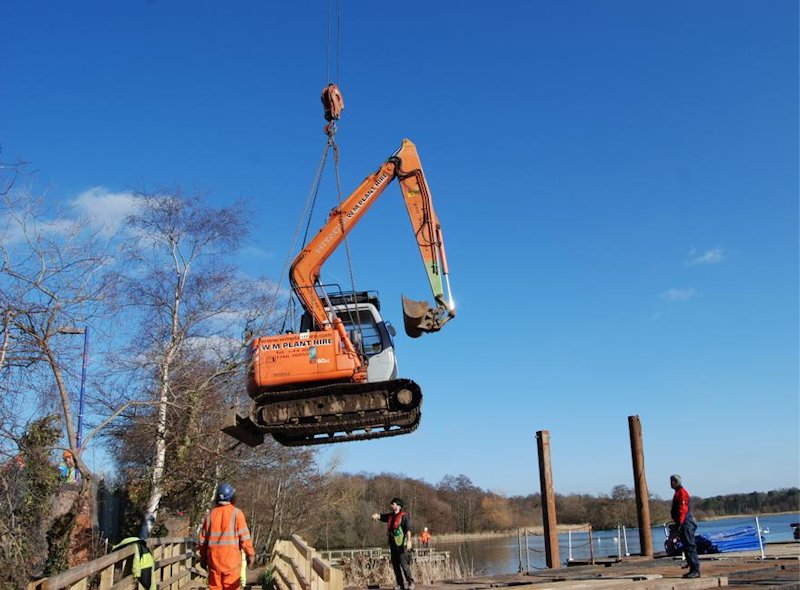 An early shot of the dredging team at work. Photograph credited to Mandy Saxby.

At last, in March 2012 the first dredgers arrived to begin the long task of silt removal.  Shipment by road of silt from the site would have increased cost significantly so it was agreed to use extracted silt to construct new islands and extend existing reedbeds.

Twenty-one new islands and five reedbed extensions were created.   Birds were very quick to benefit from a sudden increase in feeding areas as they flocked to the newly exposed mud on the islands to feed on the molluscs and other invertebrates.

The Steering Group sought other opportunities for uses of the extracted silt in order to increase the volume that could be removed.  Keltbray agreed to take a supply for construction of a training course for young golfers.  This required that the silt first be ‘de-watered’ ie dried, so a temporary island was built in Brookly Bay.  Once dried, the silt was removed from the island, shipped by barge to Boathouse Corner and loaded on to several lorries for transportation to the new golf course.

While all this preparation and planning was going on, the Clearwater Campaign was running smoothly in parallel.   As all the very expensive heavy work would mainly benefit the wildlife, FPS decided to use much of the Campaign funds to bring improvements around the Reserve for the people who enjoy Fleet Pond. However, some funds were used to fill gaps in the restoration programme: £11,000 paid for some dredging work at Sandy Bay and £5,000 went towards the new wider culvert where the widened Coldstream Ditch passes under the footpath at Coldstream Glade.

The Campaign attracted some extremely welcome sponsorship funding. FPS had rescued the old Carnival Bridge when the new timber bridge was installed. We arranged for it to be renovated, re-galvanised and painted and, with a new plaque commemorating Charles Woodward, a past Carnival Committee President, the bridge is now a mobility friendly access from Wood Lane.

In 2010 the Fleet Carnival Committee donated £2,500 from funds raised during the Summer Carnival week. In 2012, Fleet Morning Townswomen’s Guild collected £3,050 to sponsor a new pond dipping platform in The Flash pool by the Waterfront Business Park access point.

Topping that very generous gift, Fleet Lions Club sponsored the construction of the new viewing platform ‘Lions’ View’ on the eastern embankment to the tune of £12,000, the largest single donation the club has ever made to one project. To provide areas of rest along the footpath network Clearwater funds have allowed FPS volunteers to purchase and install nine timber bench seats at just over £400 each. 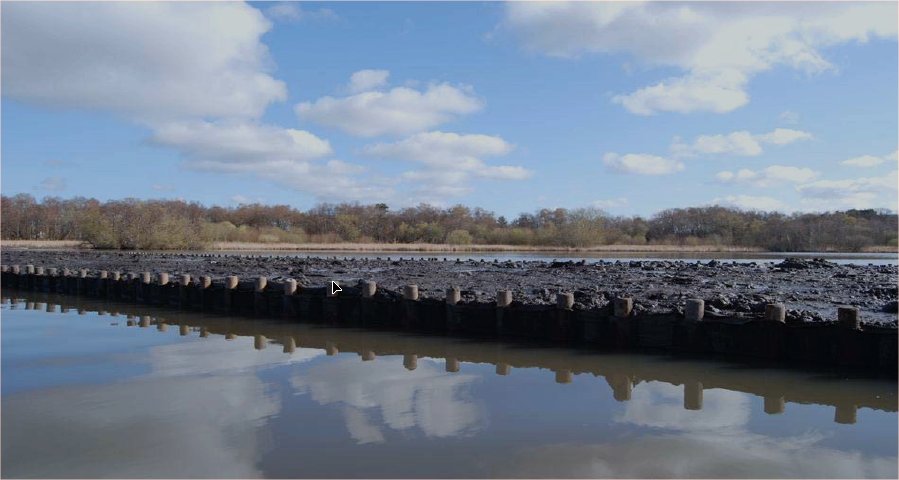 June 12, Phase 1 Completed showing one of the islands created from the silt

powered by Advanced iFrame free. Get the Pro version on CodeCanyon.