August to October was a real mixture weather-wise, though warmer temperatures prevailed throughout.  August and most of September produced some fine late summer weather, while October was dominated by wet and windy conditions from the west, far less the norm in recent years.

As is becoming the norm, Fleet Pond was again polluted by blue-green algae bloom, but the birds seemed to have coped well.

Before plunging into the highlights of this autumn’s migration, there was again late — even later than last year — welcome news on the breeding front.  A pair of Great Crested Grebes successfully hatched two young, first seen on the incredibly late date of 5th September.  I am glad to report that at the time of writing, both youngsters are thriving and still being fed by their parents as we reach the end of October! 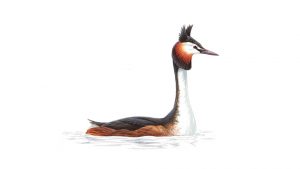 This is the fourth consecutive year that Great Crested Grebe (illustrated above) have bred at the reserve, after an absence of a decade as a breeding species. This year’s two young matches last year’s success.

Six pairs of Great Crested Grebe were in residence over the summer, but only this one pair successfully nested. A notable fact is that the date when the young have been first seen is getting later each year! This family coexisted with the growing number of migrant Great Crested Grebes present at the Pond as the autumn progressed, with peak counts of 11 in August, 21 in September and 24 in October.

August is one of the best times to connect with summer warblers and other scarcer passerines at Fleet Pond; local breeds combine with passing migrants to form large, roaming mixed flocks. The most favoured location to connect with these flocks is on the northeast side of the reserve, anywhere between the Dry Heath, the MoD field, the East Marsh and Sandy Bay.

Whitethroats (illustrated below) were particularly in evidence this year suggesting they had a successful breeding season. A tally of 23 were logged on 12th August, along with eight Stonechats and 15 Reed Buntings. 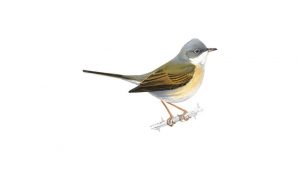 In contrast, Blackcap and Chiffchaff numbers seemed below normal. Scarcer migrants included two Tree Pipits on 21st August, and a Spotted Flycatcher and two Wheatear on 27th August at the MoD field (illustrated below). 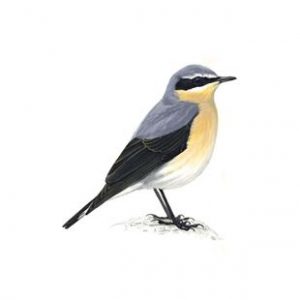 Two Yellow Wagtails roosted on the central islands on 21st August and a flock of four of the same flew over west on 23rd August. Sand Martin continued to put in a good showing in August, peaking at 150 between 10th to 14th August. In contrast, Swallow numbers were disappointing.

Three species of terns were recorded in this period, including an adult Arctic Tern with two Common Terns on 23rd August and two juvenile Black Terns which checked-in for a five day stay between 1st-5th September, and another juvenile believed to be different was present on 6th September.

Despite the late summer blue-green algae bloom, wildfowl put a better showing this autumn with the second recording of Garganey for the year.  This time it was an eclipse male found on 1st August which stayed until at least 20th August.  Unfortunately, throughout his stay he was particularly elusive and didn’t really offer close viewing opportunities.

It was a better autumn for Shoveler with two spotted on 3rd August, three on 5th and then a group of five on 27th August. Numbers steadily built up thereafter to a peak of 43 on 24th September and 38 on 23rd October. Shovelers seem to be regularly commuting between Fleet Pond, Tundry Pond and Dogmersfield Lake; hopefully they will stay into the winter. (illustrated below) 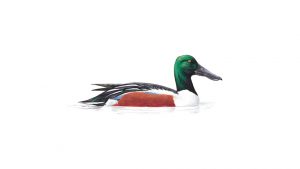 Roosting geese peaked at the end of August with a high count of 201 Canada Geese and 174 Greylag Geese on 25th August. One or two Mandarin Ducks were reported on a few dates in August and September. Gadwall (illustrated below) were present throughout the period with a peak count of six on 18th September.

This summer’s Starling roost, first reported in early June, continued into the autumn, with peak counts of 1,550 present on the evening of 21st August and 1,200 on 5th September.  Now onto late autumn and winter…..