Practising pond dipping at the Pond

Whilst taking a walk around the Pond the other week, I noticed a mother and her daughter pond dipping from one of the fishing platforms (see picture above). They were practising prior to a school event. She said that they would be using the fishing platform for the dipping itself and then go to the dipping platform proper for observation purposes only, as it was now full of fish! This came as a bit of a surprise to me and I went to take a look and yes, it was certainly full of fish (see picture below)!

A few days later I bumped into Colin Gray, Chairman of Fleet Pond Society, and told him the story. Interestingly, he said that this filling up with fish had happened previously although they were not sure why. Last year, for instance, they had to take over 5,000 fish out of the comparatively small area as it was getting seriously overcrowded!

Here’s the rather fascinating background story, as related by Colin:

“This (filling up) seems to be a regular occurrence and we are not sure why it happens. Fish are not good at explaining their actions! In December last year (2014) John Sutton called in his old work colleagues from the Environment Agency (EA) because The Flash pool was packed with fish. The EA was concerned that the fish might suffocate in such dense shoals in a very small area of water. The team used a large seine net to trap the fish and all were transferred back to the main pond. 5,000 fish of various sizes, species and ages, but mostly young, were returned to the main pond.

Catching the fish in The Flash pool

Fish can move between the two water bodies by a culvert under the footpath but seem not to move back into the main pond having assembled in very large numbers in The Flash pool. The reason is not clear. We do know that fish will migrate out of the pond using the inflow streams and it might be that these were trying to migrate out into the Hart Brook via the Small Pond on the other side of the railway line. 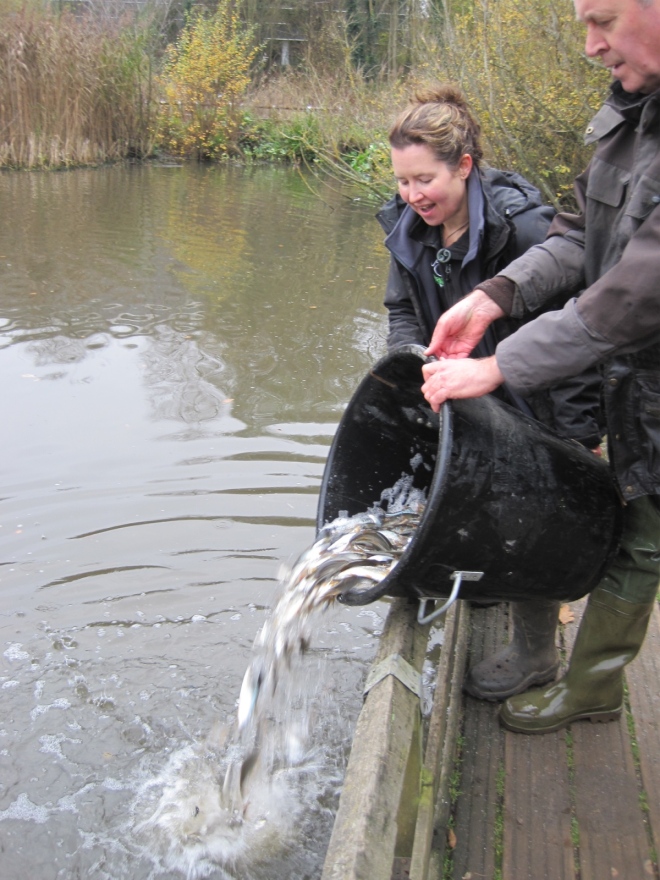 Transferring the fish back into the main pond

The wide culverts in The Flash are, however, completely blocked and no water can flow in that direction. Thus if they were trying to migrate they were frustrated in the attempt and hence came together in large numbers. One suggestion was that the fish were driven there in an attempt to escape predators like pike and Great Crested Grebe but trapped in The Flash they are easy prey for Kingfishers and Herons, so no escape there. I rather think this idea does not explain quite so many fish however.

We will call in the EA to once again do a rescue. Meanwhile if any pond dipper catches a fish, please put it back in the main pond not into The Flash pool.”

As always, there’s more going on at the Pond that you ever realise!