The first quarter of 2021 delivered a real mixed bag of weather but the birds took it all in their stride.

January, and the first few weeks of February, were uneventful bird-wise with few reports of interest, the best being three Wigeon on 1st Jan and counts of seven Shoveler and 59 Snipe on 17th Jan. Surveys of winter roosts produced counts of 350 Jackdaws on 18th Jan and 6th Feb and 150 Magpies on Feb. 4, while the Cetti’s Warbler, first reported back in late October, remained at home in the reedbeds in the northwest corner of the Pond. As the cold weather took hold in the second week of February, the Pond froze forcing an exodus of wildfowl and other waterbirds. The exception was an Egyptian Goose whose timing could not have been worse, hatching a small brood of young at that time, with mum and two small goslings seen standing on ice on 11th Feb. Unsurprisingly, the young were not seen again. 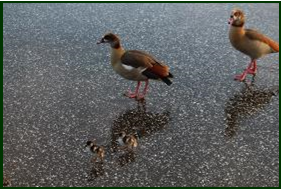 As a non-native it seems that Egyptian Geese have not quite mastered the timing of our seasons and are still prone to nest at almost any time of the year.

Return of the wildfowl

In the third week of February the ice melted, open water returned and the spring migration beckoned. The Pond took on a new lease on life, and to everyone’s surprise quickly started to attract growing numbers of wildfowl. It was as if someone had sprinkled pixie dust on the reserve! Obviously, something good was going on in the ecosystem below the surface, creating better feeding conditions, particularly for diving ducks. As those of you who are regular readers of this column will know, we birders have been lamenting the lack of winter wildfowl at Fleet Pond in recent decades, so it is great to share a positive development.

Wildfowl started to arrive soon after the ice melted; Tufted Duck took top honours with 48 counted on 21st February, rising to 57 by 4th March, and 48 still present at the end of March. These are all the highest counts at Fleet Pond since the late 1980s.  Three Pochard joined the Tufted Ducks on 3rd March.  Normally a one-day wonder, as recent Pochard sightings at Fleet Pond have been prone to be, they stayed and attracted others with a peak count of eight present on 21st March (with six still present at the end of March).  Gadwall numbers peaked at 17 on 21st February, with 14 still present at the end of March, with Teal and Shoveler bringing up the rear with peaks of eight and four respectively.  Optimism is high that at least four of these five species will stay to breed this year.  Fingers crossed!

Highlight of the spring — so far

Oblivious to the UK and European COVID movement restrictions imposed on us humans, the spring bird migration kicked in at the beginning of March.

This year it started with a bit of a ‘bang’ through the discovery of a pair of Red-crested Pochard in the middle of the Pond early on 5th March. While there is a small self-sustaining feral population of Red-crested Pochards centered around Cotswold Water Park in Wiltshire, this pair showed all the characteristics of being a truly wild pair on migration from their wintering grounds in Southern Europe, (Spain in particular) on their way to breeding grounds in north Central Europe. A very scarce migrant to the UK, this pair spent most of the day sleeping at distance as migrants often do, recovering from their overnight journey before feeding late in the afternoon.

The highlight of the spring thus far, they were perfectly documented by John Sutton who happened to be in the right place at the right time to capture this image. 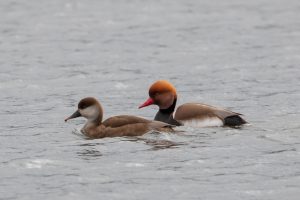 Departing that night, they were not seen the following day. This the eighth record of Red-crested Pochard for Fleet Pond, with last dating back to September 2002.

The first expected summer migrants appeared mid-March with a singing Chiffchaff logged on 14th March (the same arrival date as 2020), followed by the first Sand Martin on 15th March (two days earlier than in 2020), with Blackcap on 17th March, Swallow on 25th March and a Willow Warbler on 30th March. Good numbers of Sand Martins were sighted heading over the Pond in the last week of the month with 60 logged on 25th March and 62 on 29th. Three further Swallows seen on 27th March. 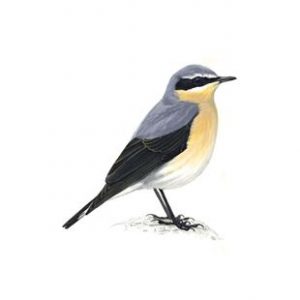 Raptors of note included sightings of Peregrine Falcon on 9th and 28th March. (illustrated below) 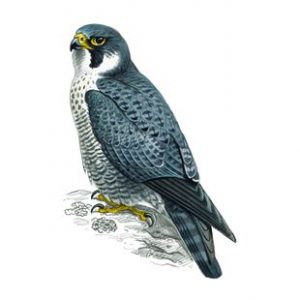 Gull passage becomes more evident as March progressed but was well below 2020’s exceptional levels. Black-headed Gulls returned to claim their nesting sites on the central islands early in the month, and the first of the now annual Mediterranean Gull was logged on 11th March, with subsequent records from 15th March (two), 27th March (five) and 28th March (one).  25 Herring Gulls took refuge on the Pond in stormy weather on 10th March with several single digits counts of this species later in the month, but only a handful of Common Gulls were logged this spring. Related oddities included an early Sandwich Tern (illustrated first below) that spent most the day perched on island posts on 28th March and a brief appearance of a Kittiwake (1st winter) (illustrated second below) that afternoon.

Both species are rarely seen inland but fortunately Fleet Pond seems to attract more than its fair share.

Return of the Grebes

Thankfully, Great Crested Grebes returned to the Pond after February’s freeze, culminating in a peak count of ten on 31st March, matching March 2020’s peak count and at least four Water Rails were in residence in March. There was, however, disappointing news on our Grey Herons, with only three nests located this year down from as many as ten a few years ago.  Little Egrets were evident throughout with a high count of three roosting on 22nd March and encouragingly there were numerous sightings of Kingfisher and Green Woodpecker.

With much spring migration still to come and this summer’s breeding season full of potential, there is plenty to observe so I encourage members to get out there, get some fresh air and enjoy the wonders of the avian world right on your doorstep.