The unsettled weather of spring and early summer continued throughout August.  Whilst temperatures were above average, there were few hot spells and plenty of rain.  Consequently, weatherwise it turned out to be a rather poor summer by recent standards. September was also warmer than average, but settled and drier until the last week when the temperatures dropped and the first of a series of weather systems started to roll in off the Atlantic, signaling the change in seasons.  Whilst it was a busy couple of months birding-wise, it was slow going until mid-August when the autumn migration started to get into full gear.

Following on from the Reserve’s record wildfowl breeding successes earlier this summer, it is pleasing to report that two pairs of Great Crested Grebes were discovered nesting in August, and at least one of these pairs successfully raised two young. Since their re-establishment as a breeding species at Fleet Pond in 2016, our Great Crested Grebes are breeding later than normal which remains bit of a mystery but is welcome news none-the-less.

Migrant waders are one of the first signs that the autumn migration is underway, with adults wasting no time starting their journey southwards. A case in point were a flock of three Common Sandpipers seen at the reserve on July 27th, the only ones to be reported this autumn. Sightings of Green Sandpipers followed with two on August 12 and singles on September 23rd and 28th, with Common Snipe reported regularly from September 22nd onwards.

Other early movers included a count of 125 Common Swift, mainly migrants, feeding over the Pond on July 28th with regular sightings of Sand Martins from mid-July onwards, peaking at 40 on August 19th.  Passerine migrants started to pick-up in mid-August and peak counts included 28 Whitethroats on August 11th, (mainly around the MoD Fields adjoining the eastern border of the reserve), 15 Chiffchaff on August 23rd, six Willow Warblers on August 27th and flocks of up to 60 Goldfinch. August’s passerine highlights came in the form of Firecrest in holly at the eastern boundary of the Reserve on August 14th and a Pied Flycatcher (female illustrated below) seen in a mixed warbler/tit flock adjoining the reserve car park on August 23rd. 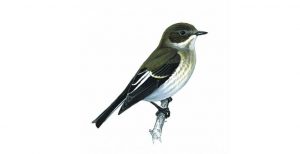 Stonechats were regular at the MoD Fields throughout, with a high count of seven on September 12th and were joined by a Wheatear on September 6th.(Stonechat pictured below.) 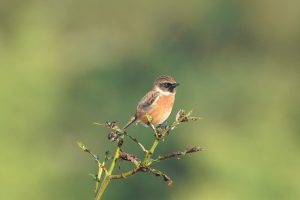 Wildfowl continued in good numbers, in large part due to the proliferation of Horned Pondweed within the main pond this summer, a welcome development. Our summer breeders were boosted by the arrival of migrants from late July onwards with the first Shoveler (five) on July 25th and a Teal on July 29th.  Shoveler numbers quickly increased in mid-August with eight on 19th, rising to 24 on 25th, 31 on 28th and peaking at 55 on September 5th, before dropping back to a still respectable 35 by mid-October.  (Shoveler pictured below.) 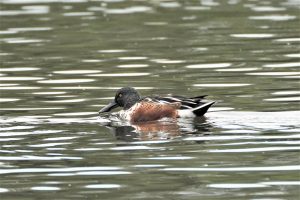 Teal peaked at 20 on September 3rd, whilst migrant Pochard were regular from mid-September onwards, with a high count of six on September 17th. Gadwall and Tufted Duck numbers remained constant throughout with peak counts of 33 (Sept 21st) and 18 (Oct 15th) respectively, whilst Coot continued to impress with a count of 85 on October 12th, just eclipsing July’s high count. Scarcer wildfowl sightings included an unexpected Goosander (1st CY) which flew into the Pond on the evening of August 1st, and a scattering of Wigeon and Mandarin Duck sightings, including six Wigeon on August 28th, and a flock of 15 Mandarin Ducks which arrived from the northwest on October 2nd. The Pink-footed Goose that arrived in mid-June and subsequently moulted at the reserve with Greylag Geese, remained into early October. Once newly winged it became more difficult to connect with from mid-August onwards, leaving southwest with other geese at dawn and only returning at dusk to roost. Post-moult, Canada and Greylag Geese numbers roosting at Fleet Pond reached impressive levels from late July onwards for those willing to wake-up early or visit in the evening twilight to witness the spectacle and sounds of hundreds of geese leaving at dawn and returning at dusk. Peak counts included 286 Greylag Geese on August 6th (a site record), 13 Egyptian Geese on September 24th and 705 Canada Geese on October 3rd.

Long-legged beasties were also well represented with a Great White Egret perched atop the island off the Chestnut Grove jetty early on August 14th heralding the first of many sightings of the species. Subsequent sightings of these ‘white giants’ (one pictured below) 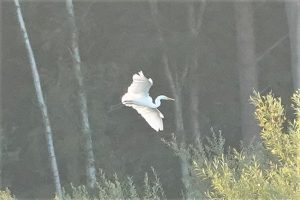 came from September 12th, 23rd-25th and October 12th-13th and 16th, with roosting confirmed on the evening of October 13th.  It is suspected that more than one individual was involved in these sightings and given their breeding success at the Avalon Marshes in Somerset this year it is hoped they will become a regular sight at Fleet Pond, in the same vein as Little Egret. Speaking of which, Little Egrets were a common sight throughout, with the reserve’s small roost peaking at eight individuals on September 15th. Rounding-out this section was another highlight of the period, a juvenile Eurasian Spoonbill (pictured below) which was observed over flying the reserve early morning on October 2nd. Arriving from the northeast, it circled the Pond with interest before deciding to continue its journey southwest . 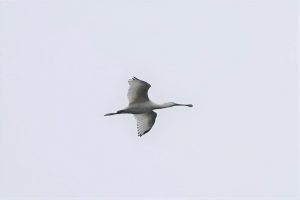 This is only the second record of Spoonbill for Fleet Pond, following an adult on May 6th and again on May 11th, 2014. 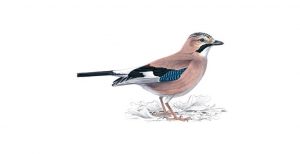 Jays are on the move this autumn and sighting included 15 overflying the Pond heading southwest on September 21st (illustrated above). The UK is witnessing a bit of a Jay influx from the continent this year due to a widespread failure of the acorn crop in Europe. Other notables included two Woodlark heading over west on October 5th, the last Sand Martin of the year whizzing south on October 3rd and the first Redwings of the autumn (four) passing over on October 4th. A Hobby was a regular sight over the Pond hunting these passing migrants at the end of September and was last sighted on October 5th.

Besides the afore mentioned geese and egrets, the Reserve remained an important roost site for birds throughout and roost counts included 200 Starlings on September 15th, 350 Jackdaws and 60 Magpies on October 5th, and 400 newly arrived Redwings on October 13th, increasing to 700 on the evening of October 16th. Nine Yellow Wagtails were sighted roosting on September 26th, a comparatively late date for this scarce migrant and Cormorants have once again started to roost at the reserve in small numbers with a peak count of 12 leaving the aptly named Cormorant Island early on October 4th. Many of these roosts should increase as autumn progresses into winter so do time your visit to witness this wonder of nature. Good birding!