It was a busy spring bird-wise, a consequence perhaps of the pandemic restrictions on people movement, Fleet Pond had some of the best observer coverage for some years. Those birders fortunate to live within walking distance only too happy to escape their homes for the permitted daily exercise to indulge their passion and witness spring migration in progress.

The weather wasn’t too shabby either with a truly glorious April followed by a May and June that a good summer would be proud of. Temperatures were one degree above average, hours of sunshine broke records and precipitation was particularly scarce in April and May. 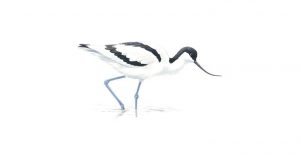 So, what of the birds? April produced a slew of good migrants; proceedings started with the surprise and noisy arrival of two Avocets early on April 4 (illustrated above). Fortunately, they landed on the islands near the Lions’ View and spent the rest of the day sleeping and preening, preparing for their onward journey. This is only the second record of Avocet at Fleet Pond (the last on May 11, 2015) and as with the previous record, these two were only present for the one day – but at least they landed!

Their appearance heralded an impressive stretch of larger migrant waders that included totals of nine Black-tailed Godwits, circling flocks of four on April 6 and five on April 8 pictured below by Evelyn Auld; 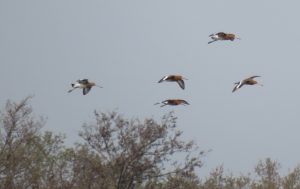 16 Bar-tailed Godwits (illustrated below) one of which landed briefly on April 16, and flocks of ten and five that flew east on April 28 and May 5 respectively; 16 Whimbrel (with a total of 14 on April 18, of which four landed on islands and singles flew north on April 19 and 24); a Curlew passed over on April 24; and two Greenshank (April 25 and May 28). Other more expected shorebirds included Redshank (April 21), flyover Oystercatchers (April 18 and 21), Common Sandpipers on ten dates between April 18 and May 31, pictured below by Chris Marney, including counts of two on May 7, 15 and 16, and Little Ringed Plovers on eight dates including two on April 12. 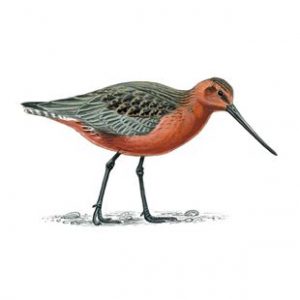 Our usual summer migrants and breeders arrived in force in the first few weeks of April. The first Swallows and singing Blackcap of the spring seen on 4th, House Martin on 6th, Reed Warbler on 8th and Whitethroat on 9th, and later in the month, the first Swift on 16th, Garden Warbler on 22nd and Cuckoo on 24th.  However, numbers of hirundines (swallows) disappointed, with peak counts of only 50 Swallow, 40 Sand Martins and lower numbers of House Martins.

Migrants terns were well represented with the first Common Tern of season being reported on the early date of April 5, followed by a flock of 18 on April 18, and up to three present from early May onwards but no breeding was attempted. More unexpected were sightings of a Sandwich Tern on April 6, three Black Terns on the evening of April 17 and 11 Arctic Terns on April 28. Migrant Little Gulls included two adults on April 6, four on 13th and a single on 18th.

Persistent early morning coverage yielded a good variety of scarcer spring flyover migrants, mostly heading north or northeast. These included a Shelduck on April 25, eight Yellow Wagtails, two records of Raven and good numbers of raptors including one of the highlights of the spring, a female Marsh Harrier which passed through low over Clearwater Island early on April 13 (illustrated below) causing havoc with the nesting Black-headed Gulls as it drifted off northwestwards. 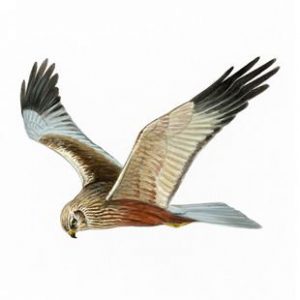 This is first sighting of Marsh Harrier at the reserve since May 2010.  Other raptors included a high count of seven Red Kites drifting over south on May 9 and several sighting of Peregrine, Hobby and Kestrel.

With spring migration largely complete by late May, attention turned to surveying the Reserve’s breeding birds. As with last year, a number of ‘Schedule One’ were present but none are thought to have bred successfully.

One or two Mediterranean Gulls flirted with the Black-headed Gull colony on Clearwater Island in April and towards the end of May but they were just believed to be prospecting. A Firecrest was heard singing in Brookly Wood again but only on the one date, while a male Cetti’s Warbler took territory in reedbeds at the Station Car Park corner and was present until at least May 30. 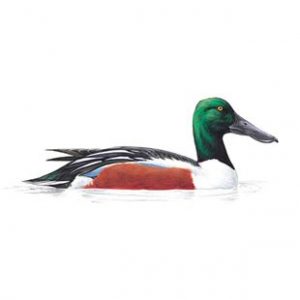 A pair of Shoveler did breed (illustrated above) a female being seen with one small duckling on May 17. Unfortunately, this youngster did not survive while a second pair of Shoveler appeared in early June. While the outcome was disappointing, the presence of Shoveler breeding for the first time at Fleet Pond is to be welcomed and hopes are high they will return to try again next year. Shoveler is a rare breeder in Hampshire with fewer than five pairs breeding each year, mostly from the protected coastal marshes, so their breeding at Fleet Pond is a positive development.

Other wildfowl had better success with at least eight pairs of Tufted Ducks raising around 13 young, and two pairs of Gadwall raising at least two young. Two broods of Egyptian Geese and one brood of Greylag Geese were seen but the young are not thought to have survived, while a pair of Mute Swan are on course to raise two cygnets. One pair of Great Crested Grebe bred successfully with two young seen in early July and estimates of the Black-headed Gull colony on Clearwater Island suggest at least 150 pairs nested with 150 young on course to fledge.

For the second year in a row, a pair of Cuckoos were present throughout May while estimates of summer warblers and other passerines territories in the reserve included four Garden Warblers, 13 Blackcaps, four Whitethroats, ten Chiffchaffs, 25-30 Reed Warblers and four Reed Buntings. Other good news included the return of breeding Sedge Warbler, with two territories in the reedbeds on the west side of the Reserve, and a pair of Stonechat observed with three young on the Dry Heath on May 27. Neither of these species have bred at Fleet Pond this century, so their return is a positive development. A further four pairs of Stonechats were noted at the adjoining Wood Lane Heath and the MoD Fields east of the reserve, so they seem to be having a productive year.

I know that June is early-summer in our human calendar, but for birds mid-June can mark the first stirring of autumn migration as non and unsuccessful breeders head quickly back south to their wintering grounds. So it was this year, with the first migrant wader being logged on the early date of June 13, a Green Sandpiper seen at the Coldstream Marsh. It was followed by a Curlew over west on June 20, a Redshank on June 28 and the first ‘autumn’ Common Sandpiper on June 30. Four unseasonal Pochard were present on June 20 while post-breeding roosting flocks started to develop early with an impressive murmuration of Starlings, peaking at 1,600 on the evening of June 15 and up to 100 Jackdaws throughout.

All in all, it was a packed few months and now, with autumn migration underway, there is plenty to discover. Good Birding!