Visitors to Fleet Pond regularly amble, power walk, jog or cycle the circular route skirting the perimeter of the water, probably without giving it a second thought. However, this circumnavigation was only made possible by the back-breaking work of a band of enthusiastic Society volunteers between 1976 and 1979, led by Society Chairman Terry Sims.

Current Society President, Peter Martin, documented the early work of the Society in his booklet ‘Fleet Pond Society 1976 – 2006: The First 30 Years’ (Martin, 2009) from which I have taken much of the information in this article.

A major challenge the team faced in completing the route was a lack of bridges.  Two would need to be installed; one across the Brookly Stream and the second at the point at which the large Pond flows through to the small one. Peter Martin relates how Hart District Councillor Peter Carr offered the services of his family firm to construct a bridge over the Brookly Stream, provided the Council ‘… would pay £200 for two lengths of steel’. (Martin, 2009) The firm would donate the cost of other materials and labour to the Society for free; a generous offer as the true cost of the bridge was £3,500. Ultimately £100 was raised through jumble sales held by the Society, and the Council donated the other £100, on top of the £1,500 they had already committed to works in the Reserve.

The bridge was constructed and delivered to the Kenilworth Road depot where volunteers painted it dark green. On 8th January 1977, with the concrete supports having been installed, a group of volunteers edged the bridge into position using brute strength, a trolley, and a block and tackle strategically placed in a tree. It remained in place until 2011 when the current wooden bridge was installed. 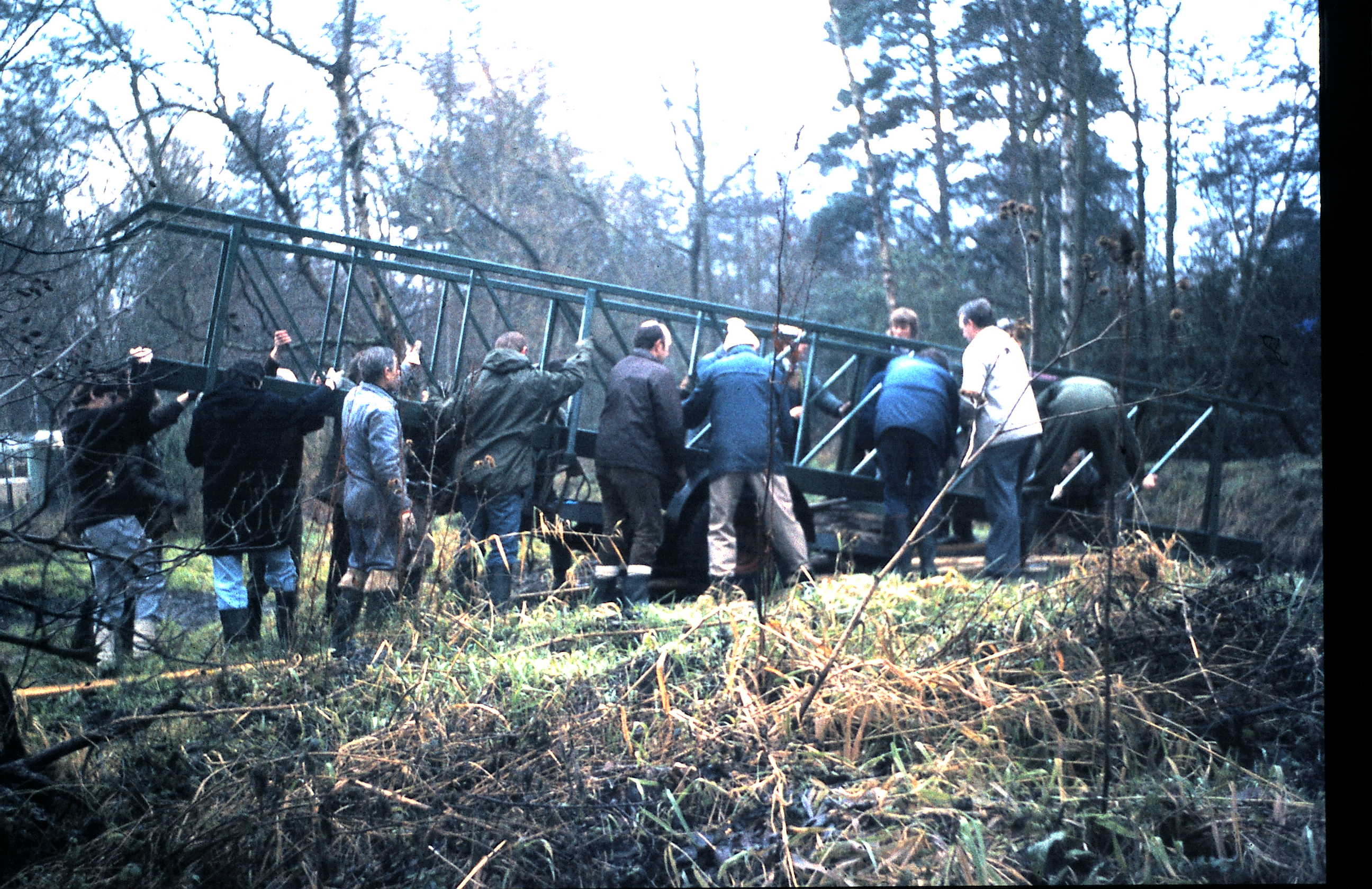 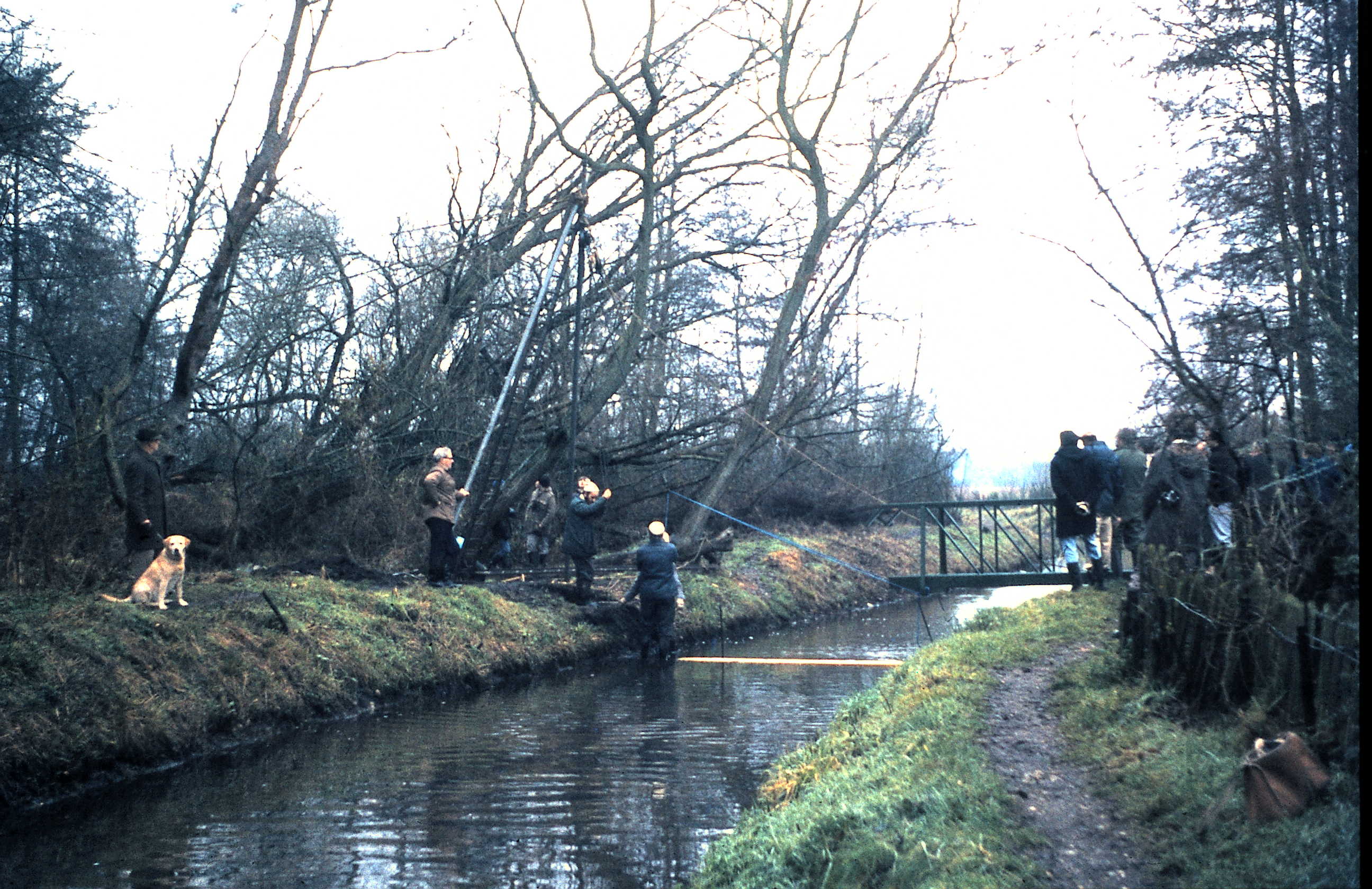 Work continued on the perimeter path, a hugely ambitious project for the group. Trees had to be removed by the industrial estate in order for the path work to begin. It was laid using broken breeze blocks and loose material. Peter commented that: ‘Laying the broken blocks was rather like putting a jigsaw puzzle together, with gaps then filled by the loose material’ (Martin, 2009). 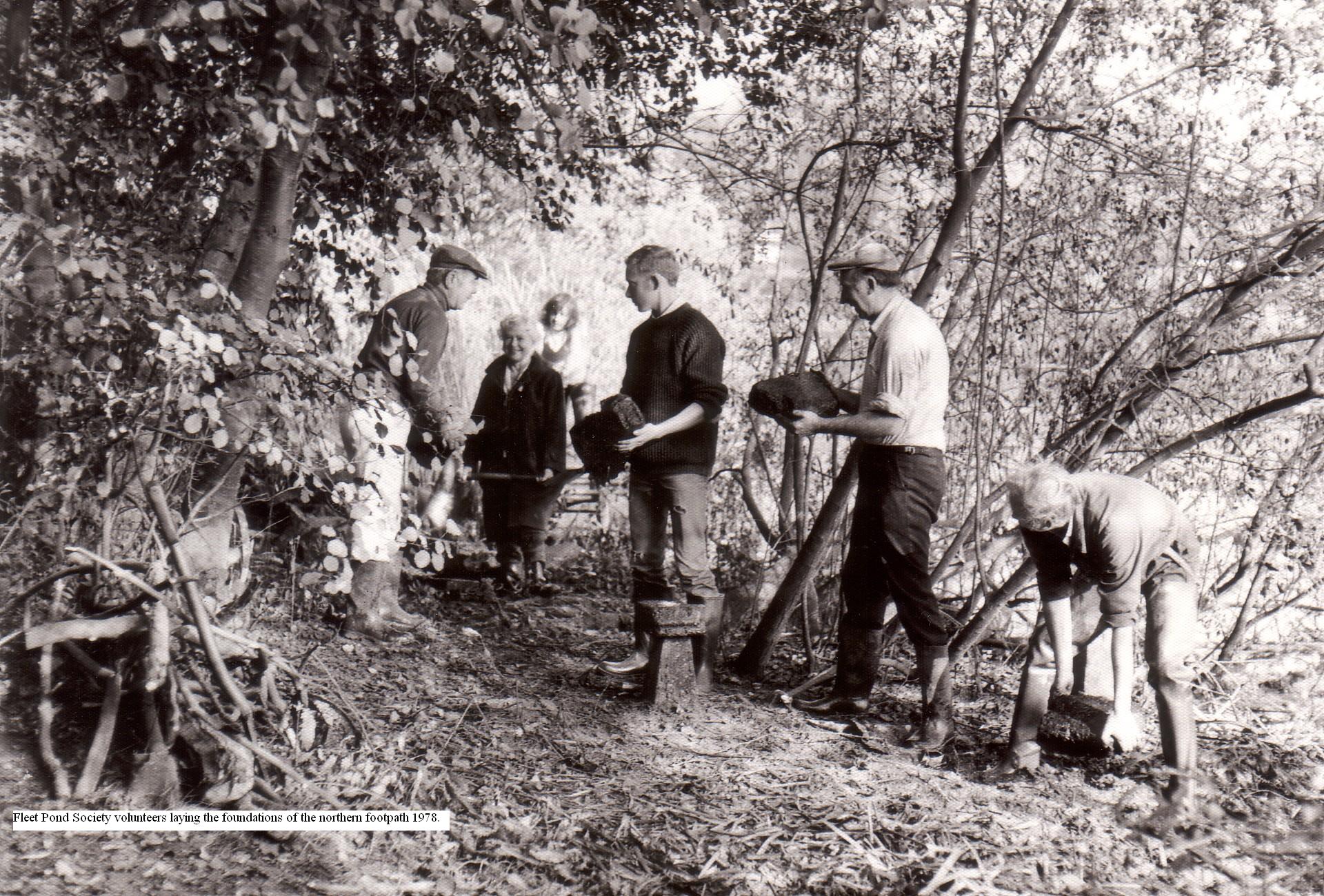 Work on the path reached the northern bank in the Spring of 1977 and railway sleepers were installed along the water’s edge. As the path progressed further along the bank the Council provided a pontoon onto which materials were loaded and then punted down to the work site. However, this could be a tricky manoeuvre as the weight of the load could cause the pontoon to list ‘…at almost forty-five degrees…’ (Martin, 2009) causing some volunteers to have an unexpected dip in the Pond! 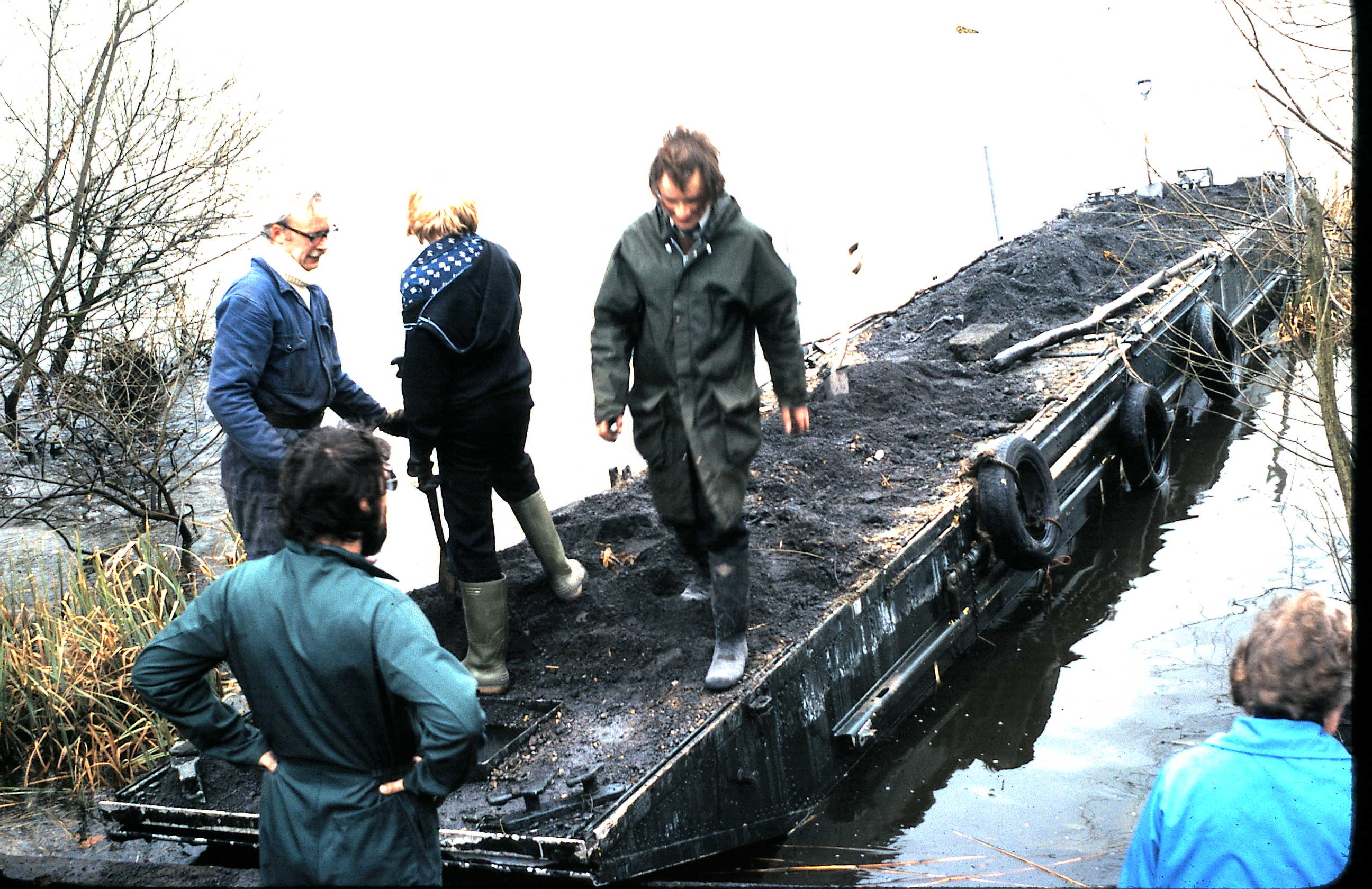 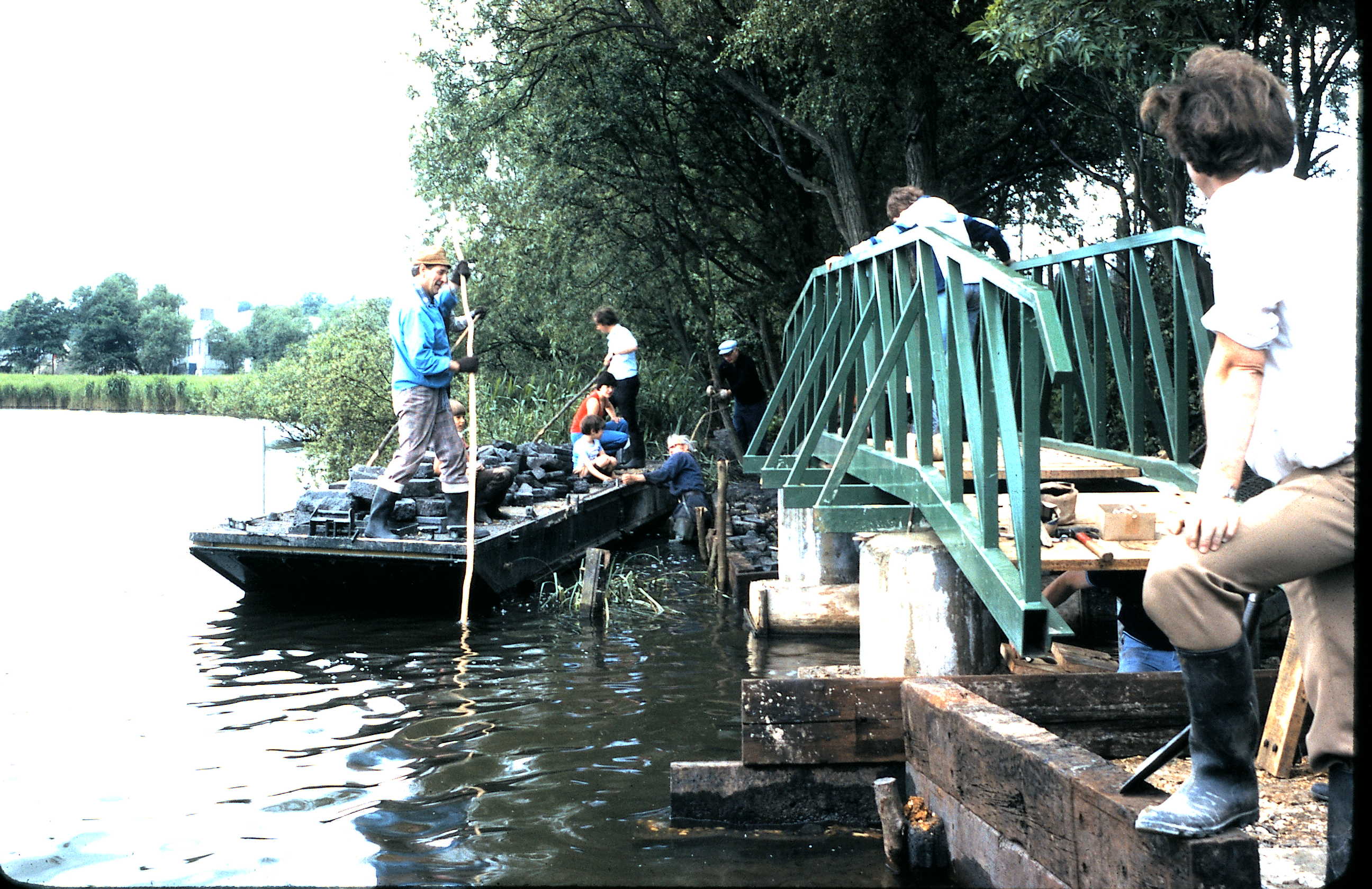 By 1979 the two halves of the perimeter path were joined by the installation of the second bridge. This spanned the channel along which water flowed into the small Pond. Again, it was the physical strength of the volunteers which impressed as they manhandled the two halves of the bridge so that they met. A ‘lucky volunteer’ then had to balance on the metal over the fast flowing deep channel to bolt the two sections together. Once that had been done, it was just a matter of laying the planks in position.

The bridge was named ‘Carnival Bridge’ as the Fleet Carnival Committee had donated £500 towards its cost. The bridge was opened by Kathleen Woodman whose husband Charles was a founder member and Vice-President of the Carnival Committee. This bridge was replaced in 2011, but the old bridge did not go to waste, it was renovated to create a new crossing at the Wood Lane entrance to the Reserve. The official opening was a very special occasion as the guests of honour were the family of Charles and Kathleen Woodman. This time it was their daughter, Beaulah Bower, who was thrilled to cut the ribbon. 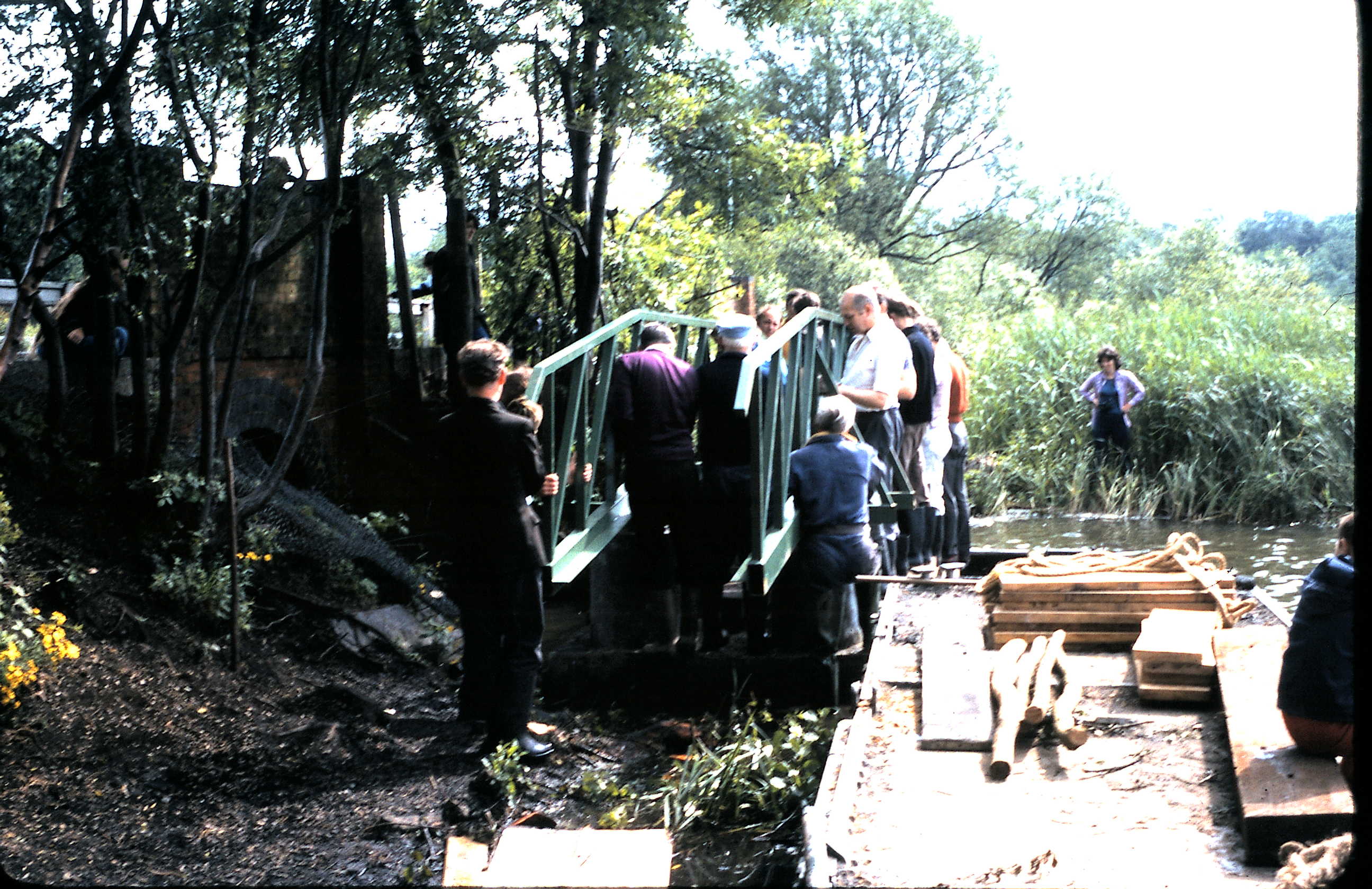 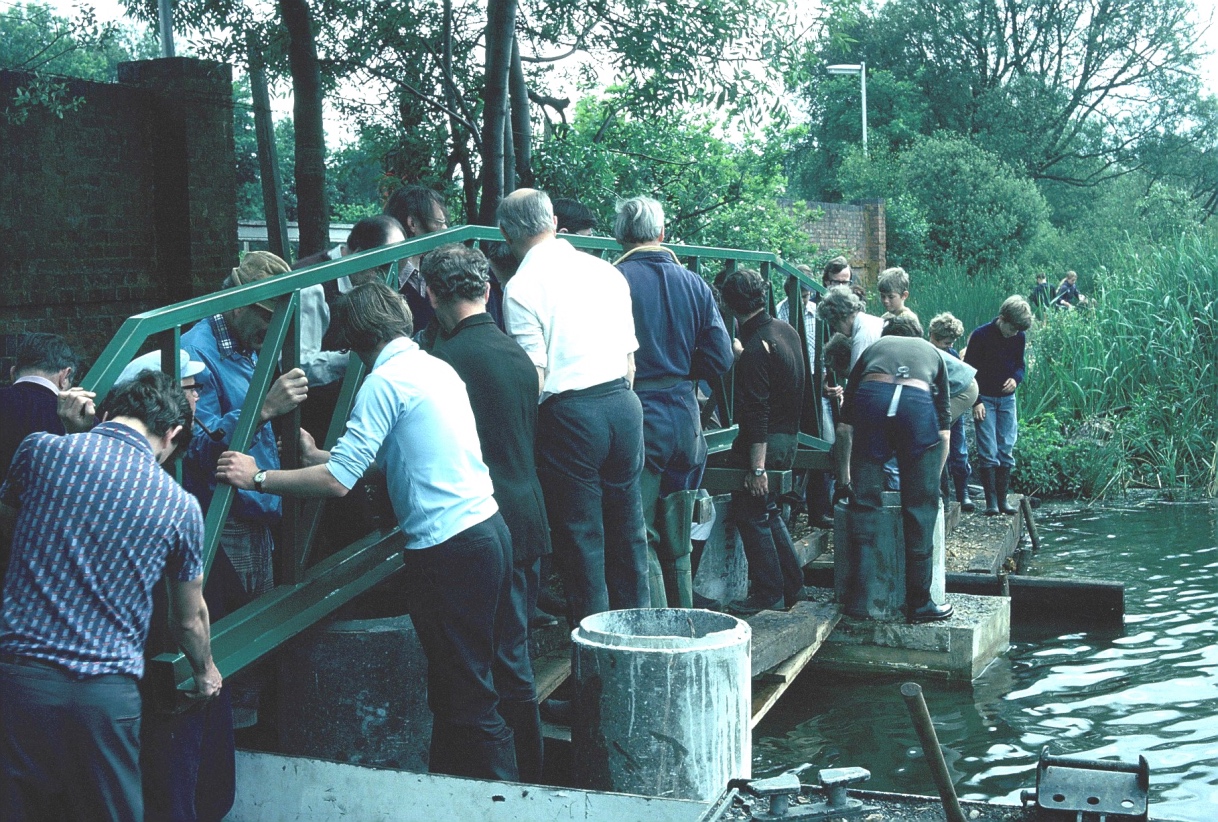 At the end of their hugely ambitious project, the volunteers of the 1970s received a letter of thanks from the Council ‘…for all their efforts in completing the perimeter access…’ (Martin, 2009). Today we too can offer a ‘thank you’ to these early Society volunteers who enabled us to enjoy a circumnavigation of the whole Pond. 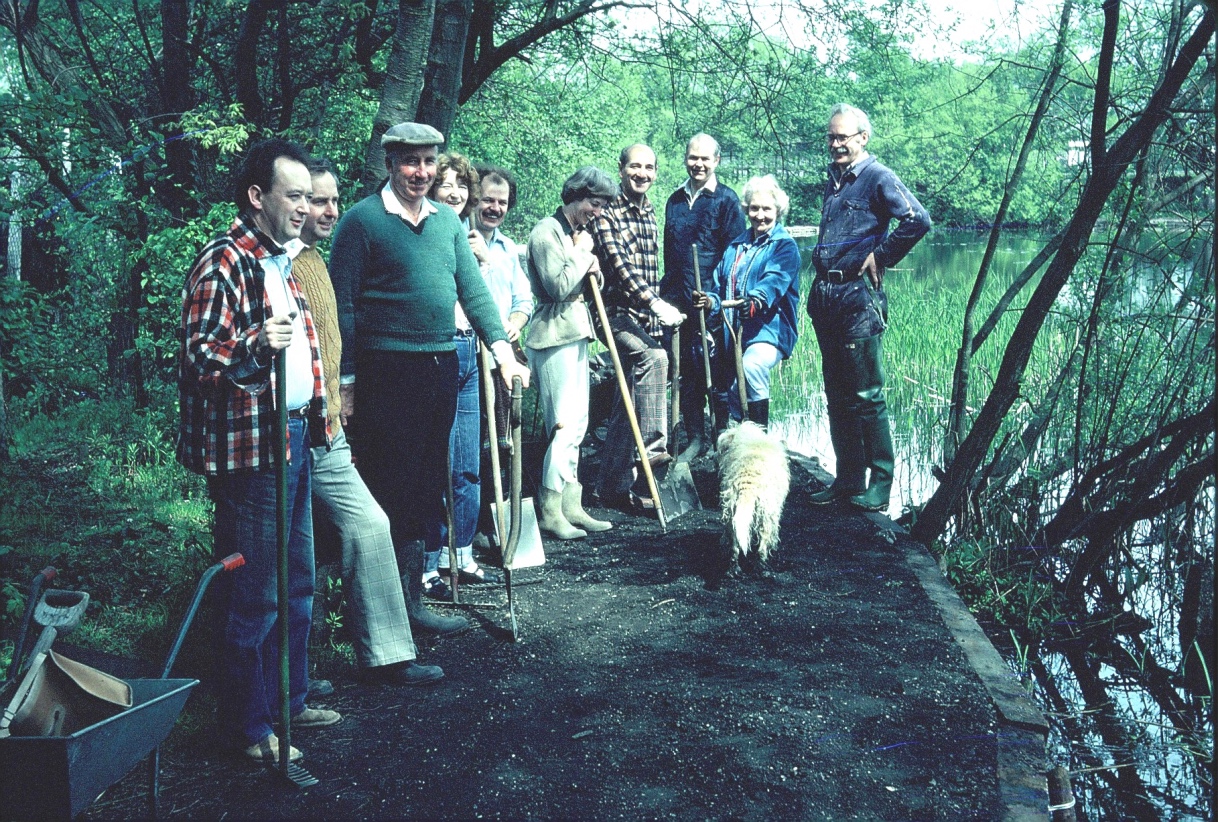 Work on this circular walk never really stops. Another entry point was made possible by the addition of the bridge over The Flash alongside the railway station in 2011. Current volunteers and Countryside Rangers can regularly be seen maintaining the pathways; most recently on the eastern side of the Pond where a large section of the path was re-laid last year to make it more accessible to all visitors.

The photographs above are from the archive of the Fleet Pond Society.