For birders, November signals the winding down of the autumn migration and the prospect of less exciting times as the traditional winter lull sets in. It’s even tempting to hang-up the binoculars, given the reduced daylight hours and colder conditions, retire to that favoured fireside armchair with a mug of hot chocolate and hibernate until the first signs of spring.

Fleet Pond’s track record of experiencing an exodus of wildfowl by October doesn’t help the cause, often leaving the reserve’s water surface uncomfortably barren of birdlife over the winter months. However for those who persisted through the dull, but admitted largely mild weather for the time of year, the last two months of 2021 bucked the recent trend, with markedly better numbers of duck and a few other goodies too.

The higher numbers are welcome, and is further evidence of better water quality and aquatic plant growth within the main pond. However, Teal numbers remained below par with a high count of just 15 on December 14 and there were only a handful of sightings of Pochard, including two females on December 14. Less expected were three Wigeon on November 14 and a male Goosander on December 04 (illustrated below). A decline in wildfowl numbers was noticed towards the end of December. Increased disturbance associated with the start of work on the northern path is a potential cause, but regardless this decline will be monitored closely. 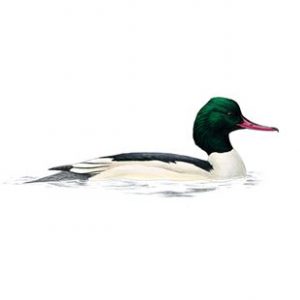 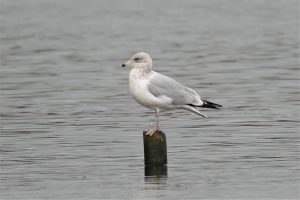 Double-figures of the latter have been commonplace since mid-October and the reserve seems to have become their current favoured local daytime loafing site to wash and preen.  A count of 115 present on November 07 is the reserve’s highest this century, while 93 on December 17 included an individual of the sub-species ‘Argentatus’, hailing from the Nordic region. Black-headed Gulls were also numerous, with pre-roost late afternoon build-ups taking place with a high count of 150 on December 12. In contrast, the inappropriately named Common Gull was scarce throughout, with never more than two or three observed at any one time.

There were several more appearances of Great White Egret (Oct 26 and 29, Nov 30 and Dec 12) pictured below and Little Egrets were present throughout with peaks of three roosting on November 26 and again on December 9. 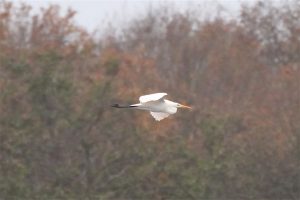 Numbers of Great Crested Grebes remained disappointing, only reaching six and there were several sightings of Little Grebe including two on November 14.

Winter surveys produced a high count of exactly 50 Snipe on December 26 and a minimum of six Water Rails were detected from the reserve’s reedbeds.

Notable passerines included the usual Cetti’s Warbler singing from the Northern Reedbed on November 9 (the last record of 2021) and there were several sightings of wintering Firecrest from the hollies in the Brookly Wood (pictured below) including two on December 07. 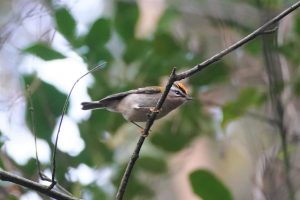 Winter finch flocks included 80 Goldfinch (pictured below, left) feeding in alders adjoining the Station Car Park on November 27. In contrast, Siskins (illustrated below,right) proved to be unusually scarce until that is, the first week of December when they appeared en masse, with a particularly impressive swarm of 620 seen over the alders at the end of Chestnut Grove on December 12, and 600 still present on Christmas Eve.  These are the highest Siskin counts for over a decade, and despite searching only the one Lesser Redpoll was detected within this flock on December 24. Notable roost counts yielded 220 Jackdaw on November 10, 74 Magpie on December 5 and 60 Starling on November 14. 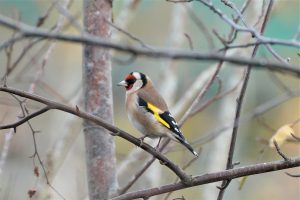 Now back to that armchair.  Not too long to go until the spring migration gets underway in early March!  Good birding.